Almost certainly the Mendrisio Holy Week Processions, like all the others, are older than their first mention at the beginning of the 17th century.

The Thursday procession is a popular sacred representation, in which the 20 or so groups or characters do not recite a text, but parade along the streets of the village, simulating the route to Calvary. The only ones to express themselves are the Jews, who shout invectives and the death sentence of Christ, so the procession is known as Funziun di Giüdee. For at least three centuries it was organised by the confraternity of the Sacrament.

The solemn Friday procession is an extension of the rite of Christ's burial and was therefore originally run by clergymen. With the submission of neighbouring Lombardy to Spain in the 16th century, the tradition of calling it Entierro spread. It represents the nocturnal burial of Christ, usually accompanied by the grieving Mother. In Mendrisio, it seems that the statue was only inserted into and after the return of the Servants of Mary to the convent of San Giovanni in 1644. It is certain that from this date onwards, they were the ones who managed it, sometimes in conflict with the parish priest, until the suppression of the Mendrisio convent and almost all Ticino convents in 1852. 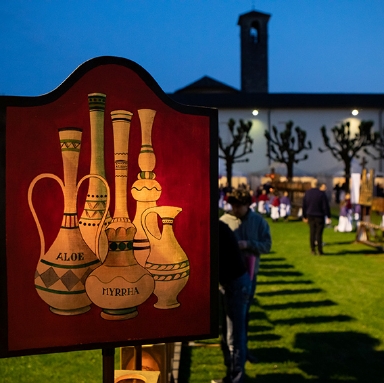 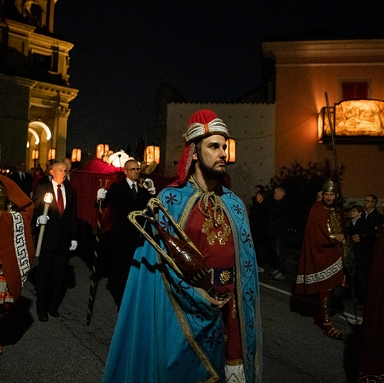 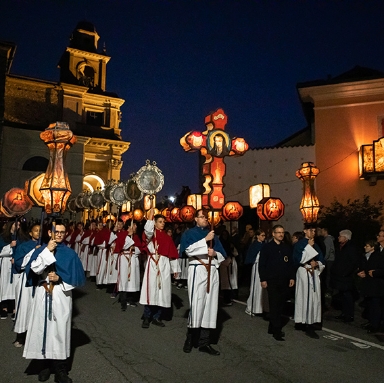 In addition to the two evening events, other traditions of Holy Week have been preserved in Mendrisio.

Sepulchres, which have been widespread throughout the Mediterranean area for at least a thousand years, are more or less rich or complex stagings of the catafalque for the dead Christ, assiduously visited by devotees. In Mendrisio, until the restoration work completed in 2014, a theatrical scene was set up in the church of Santa Maria nascente in the village.

Much rarer and therefore exceptional, but very popular with the people of Mendrisio, is the Septenary in the Church of San Giovanni, formerly belonging to the Servants of Mary. This is an evening service dedicated to one of Mary's Seven Sorrows, with special prayers and the singing of the Stabat Mater (attributed to Jacopone da Todi) in the form of an antiphon. To music of unknown origin, the men take it in turns to sing one verse in the church choir and the women respond from the nave with the next.

Unfortunately, the large and impressive temporary altar in the Church of St John (painted by Bagutti around 1775), where the statue of Our Lady of Sorrows used to be placed, is no longer in place. Now it is taken out of its niche in the apse, dressed in its festive costume (from the beginning of the 19th century, restored) and placed on a table decorated with paintings with its rich golden stretcher (around 1780) until shortly before the procession.

In the last decade of the 19th century, the socio-economic circumstances of the canton finally allowed for a considerable investment in the restoration and renewal of the processions. On that occasion, the newly founded committee, which still runs the whole organisation today, decided to fix the year 1898 as the first centenary of the reorganisation because one of the few historical documents still preserved mentions the landfogto [landvogt], i.e. the Helvetic governor of the Italophone provinces who was in charge of the district from the 16th century until 1798.